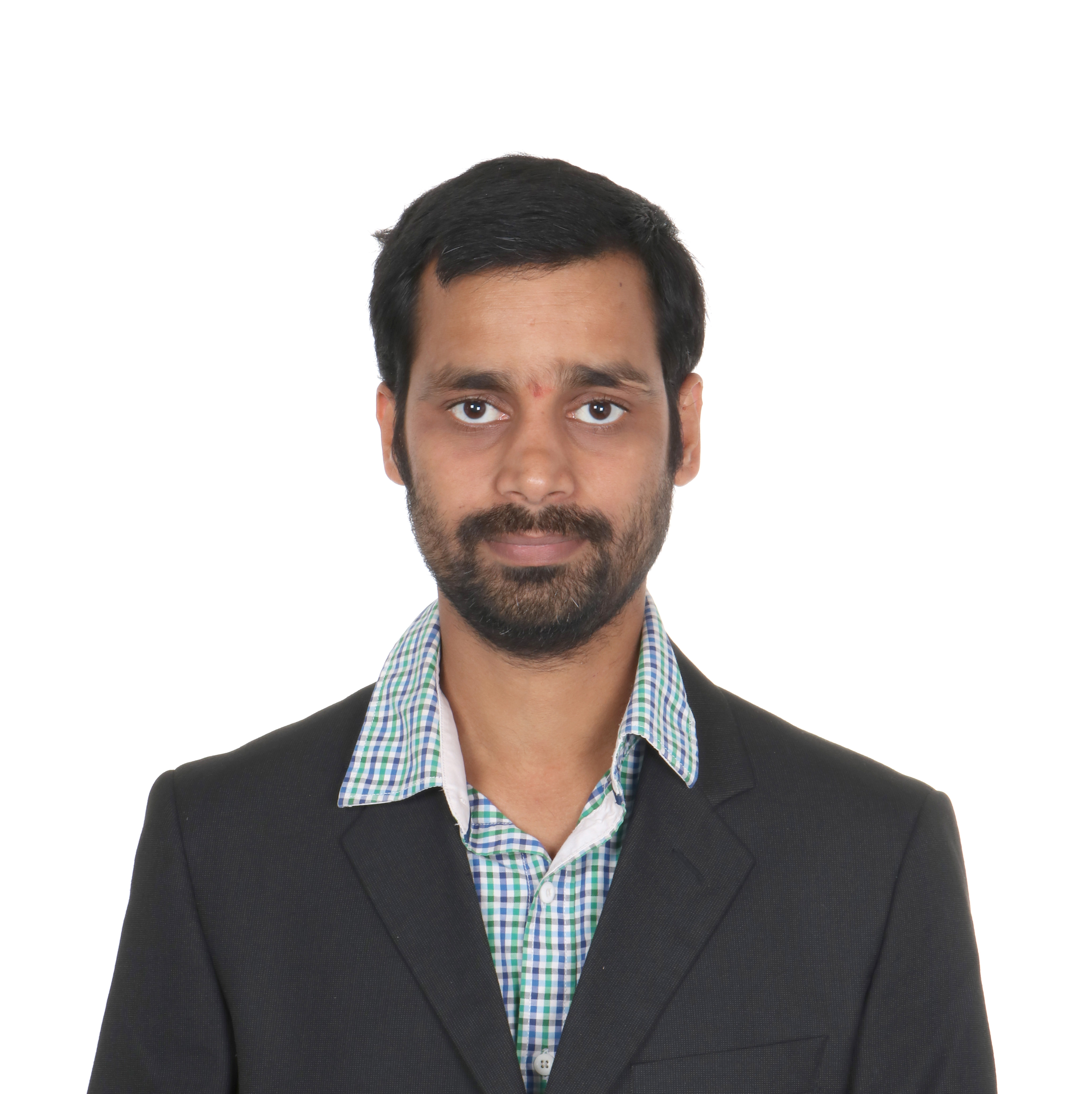 I am an Assistant Professor at Department of Applied mechanics, IIT Delhi. Earlier, I was a PBC VATAT Postdoctoral fellow at Weizmann Institute of Science, Israel. There, I worked on different aspects of flow instabilities of complex fluid flowing in a plane Poiseuille flow with Prof. Victor Steinberg.

Before this, I was postdoc at Department of Applied Mathematics and Theoretical Physics, University of Cambridge and worked on air curtains for energy efficient buildings funded by EPSRC with Prof. Paul Linden. There, I carried out laboratory experiments to better understand the dynamics of a human walking through the air-curtain in a doorway, and also the mixing in stratified flows and jets.

During my PhD at the Department of Mechanical Engineering, Indian Institute of Science, Bangalore, I studied two phase turbulent flows with the supervision of Prof. R. N. Govardhan. I completed my B.Tech. in Marine Engineering from WBUT with university Bronze medal. I am broadly interested in two phase turbulent flows, mixing in turbulent and stratified flows, flow in blood vessels, droplet dynamics in clouds, polymeric flows, flow instabilities and flow over bluff bodies.


I strongly encourage the dedicated students to contact me for their masters or PhD study. My lab (Fluids lab for Environment, Engineering, and Biology: FE2B) focuses on Understanding Turbulence For Societal And Industrial Need: Two phase, Stratified And Elastic flows. We are basically a group of experimental enthusiasts interested in solving fluid dynamics problems. Interested students are encouraged to contact me personally.

Neither Elastic turbulence (ET) or turbulent drag drag reduction (TDR) state for polymeric flow enjoys the good theoretical understanding as compared to the Newtonian turbulence. To understand it, I am using a long straight 2-D channel of large aspect ratio (width/height) of 7 with a height of 0.5 mm and length of 1000 height for the investigation of elastic instabilities. I am tracking the evolution of unstable wave and transition mechanism in 2-D channel flows. I am simultaneously using the pressure drop measurement, Laser doppler velocimetry (LDV) and Particle image velocimetry (PIV) to measure the drag, high temporal resolution velocity from LDV and spatially resolved velocity from PIV to understand and couple the flow structure and the flow drag.

I observed elastic wave and non-linear break down of flow structure to lead to elastic turbulence and observed that elastic wave and turbulent state is coupled. I further studied the relation between wall friction and instability at different Weissenburg number (Wi = polymer relaxation time/characteristic flow time) and observed various flow states. 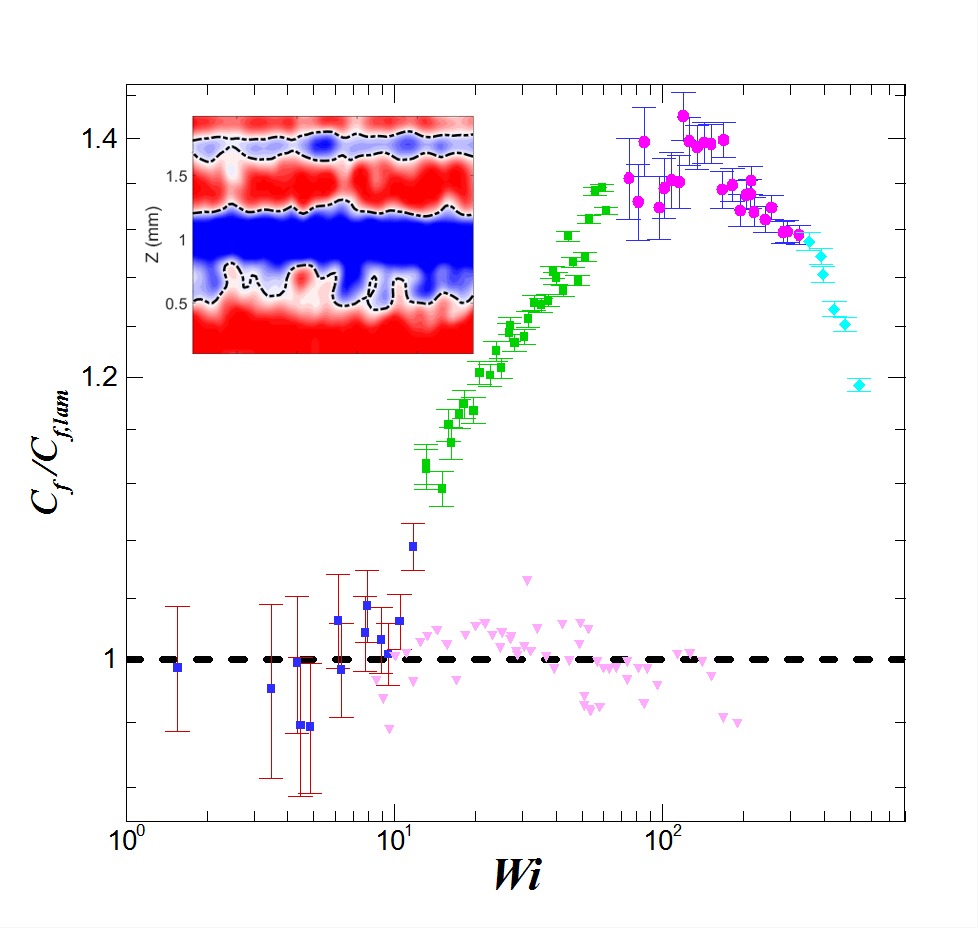 Heat and mass flow between cold and warm environments due to the pressure difference between both sides. This exchange causes a loss of energy and human comfort in the buildings. To minimize this heat and mass flux, an air curtain is often used as an artificial separation barrier. Although air curtains are mostly used to facilitate passage through the doorway, the effect of human and vehicle traffic on the stability and effectiveness of an air curtain is not well understood. We have conducted laboratory experiments to examine the effect of a person passing through the curtain. We measured the flow rate through and the density across the doorway with and without the air curtain to calculate the effectiveness of an air curtain, and find that the effectiveness is decreased by the passage of a person and that the effect increases with increasing walking speed. We visualized the jet and wake using dye to determine how the air curtain is deflected by the passage of a person.

Time resolved particle image velocimetry has also been done to study the flow structure and entrainment due to the interaction of the air curtain and wake of the cylinder. We also observed that the effect is independent of the direction of travel, a result of the relatively fast walking speed compared with the stack-driven exchange flow under normal circumstances. We studied it’s feasibility in increasing containment effectiveness of isolated hospital rooms. Finally, we compared the lab scale measurement with the real scale air curtain measurements at TNO, Delft, Fluent simulation and theoretical models. Subsequently, we studied the effect of heavier curtain fluid on stability and effectiveness of air curtain. 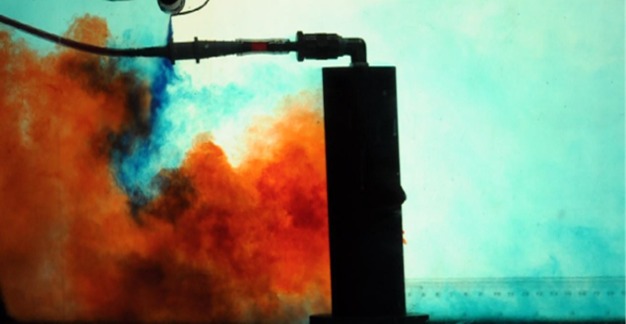 I have also worked on experimental investigation of the unsteady behavior of circular and two dimensional hydraulic jump and developed a theoretical model. Surfactant, Acetic-acid, and Propanol are separately mixed in water to vary the surface tension and viscosity of the liquid so that we could study the effect of fluid properties on hydraulic jump.

Interaction of bubbles with vortical structures

Bubbly turbulent flows occur in a variety of industrial, naval and geophysical problems. In these flows, the bubbles in the flow interact with turbulence and/or vortical structures present in the continuous phase, resulting in bubble motion and deformation, and at the same time modifying the turbulence and/or vortical structures. Despite the fact that this has been a subject of interest for some time, mech- anisms of bubble break-up due to turbulence and turbulence modulation due to bubbles are not well understood. 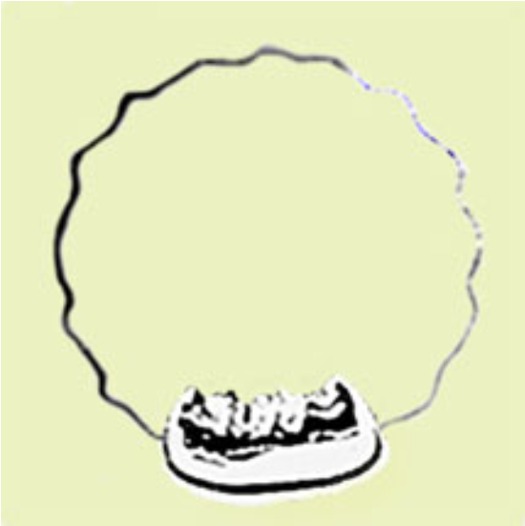 I have also worked on sustainability of air pockets in the crevices on super-hydrophobic surface by controlling the air saturation level of the incoming water flow to get sustained drag reduction. It has been shown there that the shape and depth of air water interface affects the wall drag.


Download the PDF only for personal usage. Copyrights of the journal is with its publisher and request them for professional usage.

Featured/discussed in 39 news agency including BBC, Le Monde, and Fox news as “A weird water behavior that intrigued Da Vinci finally has an explanation” ; News

Side view of interaction of vortex ring with a bubble.

Complex bubble path due to its interaction with eddies in turbulent channel flow.

Interaction of human wake (red) with planar curtain jet (blue) at the entrance of a building.